A single centre, retrospective study of patients ≥50yrs with first presentation LVV between 01.06.2008-01.06.2015 was performed. Patients were categorized according to SpA or associated disease, other AI or idiopathic LVV (iLVV). Clinical, laboratory and imaging findings were compared. Kaplan-Meyer survival analysis, with relapse taken as the primary end-point, was performed.

LVV was confirmed in 62 pts, of who 16/62 (26%) had SpA or associated disease. In these patients, LVV presented earlier (59.2 SpAD vs. 68.1 AI and 70.3yrs iLVV; p=0.01) and occurred predominantly in spring compared to autumn and winter in non-SpA patients, was associated with more centralised pattern of distribution (p=0.05) and was more likely to exhibit a refractory course (p=0.05). Overall relapse rates were similar across groups. Smoking-status influenced age of onset in all groups, being associated with earlier onset.

open-access license: This is an open access article licensed under the terms of the Creative Commons Attribution-Non-Commercial 4.0 International Public License (CC BY-NC 4.0)(https://creativecommons.org/licenses/by-nc/4.0/legalcode), which permits unrestricted, non-commercial use, distribution and reproduction in any medium, provided the work is properly cited.

The aim of this study was to further assess the relationship between LVV and SpAD. Beyond merely establishing a link between these conditions, the main focus is to characterize LVV in SpAD and compare the findings to both patients with non-SpAD autoimmune disease and those with no known autoimmune disease.

A retrospective analysis of 1st presentation of large vessel vasculitis at our institution between 1st June 2008 and 1st June 2015 was performed. To avoid overlap with Takayasu arteritis, only patients ≥50 years at symptom onset were included. Diagnosis was confirmed in all cases either by imaging or vessel biopsy. Patients subsequently diagnosed with paraneoplastic vasculitis or severe atherosclerosis were excluded from the analysis.

Sub-analysis, examining the independent influence of age on disease presentation and course was subsequently performed in 3 groups, taking arbitrary cut-offs of <60yrs for younger patients and >70yrs for older patients.

Data are reported as means (±standard deviation), with time-dependent variables being expressed as median [interquartile ranges]. Unless stated otherwise, p-values are two-sided, with <0.05 being considered statistically significant. Categorical variables were analysed using Chi-Squared test or Fisher´s exact test. Continuous variables were compared using ANOVA, or in the age-dependent sub-analysis with the Kruskal-Wallis Test. Relapse-free survival was calculated using a Kaplan-Meier analysis.

In total 62 patients (48 female; 77%) were included. The diagnosis of LVV was based on imaging in 53 (85.5%) patients and on a pathological result of a biopsy from the temporal artery in 9 (14.5%) patients. Median age at LVV diagnosis was 65.9 [57.6 – 72.1] years. A known autoimmune disease was present in 29 (47%) patients, of whom 16 (26%) had a SpAD. Whilst no differences in gender composition were observed, patients in the latter group were significantly younger at presentation (59.2yrs) versus 68.1yrs among other AI diseases and idiopathic LVV (70.3 yrs; p=0.01). SpAD was evident in over one-third of patients presenting before 70 years, whereas only 1 patient (4%) presenting after 70yrs had SpAD (p=0.05). Detailed information on cohort group composition is illustrated in Fig. (1 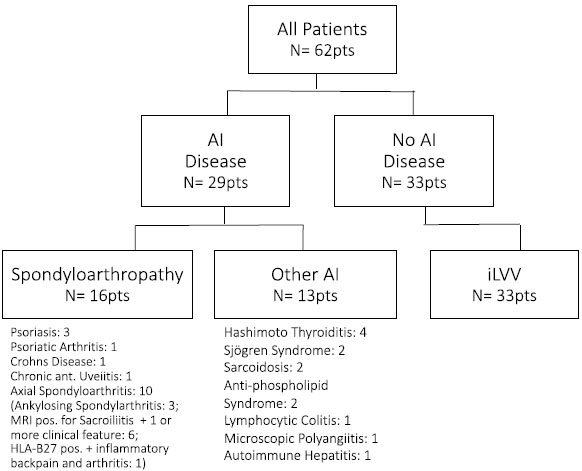 ). Patient demographics are summarized in Table 1.

No significant differences in clinical symptomatology of LVV were seen between groups, with myalgia being the commonest symptom in all groups. Among SpAD patients the majority (56%) became symptomatic in spring, whereas autumn and winter predominated in the other groups (Fig. 2 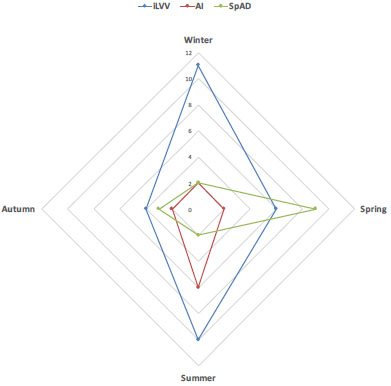 ), p=0.02). The median interval between symptom onset and diagnosis was 91 [49 – 198] days for the entire cohort, again with no differences between groups.

Raised serum C-reactive protein and erythrocyte sedimentation rates in the absence of leucocytosis were characteristic of all groups with no significant quantitative differences.


Whilst a slightly lower proportion of the SpAD underwent positron emission tomography (PET-CT) (44% vs. 62% AI and 64% iLVV; p=0.46), no significant imaging bias within the groups was apparent. Whereas the extent of vessel involvement was similar across all groups, significant differences in the patterns of disease existed. SpAD patients demonstrated predominantly central disease with involvement of the ascending aorta in 92% of cases, compared to 83% in the control group and 55% of AI patients (p=0.05). Conversely, involvement of the abdominal aorta among SpAD patients was lower than in the other groups (62% vs. 90% iLVV and 73% AI; p=0.08).

In terms of treatment, no differences in drug management existed between groups (p=0.39). Although no differences in overall relapse rates were observed (p=0.62), SpAD patients were more likely to develop refractory disease, defined as ≥2 relapses on treatment (31% vs. 6% iLVV and 23% AI; p=0.05). Pre-existing treatment with corticosteroids at LVV onset was noted in 8 (13%) patients. Developing LVV whilst taking corticosteroids did not increase the likelihood of relapsing on treatment (p=0.79) or developing refractory disease (p=0.76). None of the patients in the SpAD or AI groups received biological agents or disease-modifying anti-rheumatic drugs (DMARDs). Main treatment was non-steroidal anti-inflammatory drugs (NSAID) or in case of peripheral manifestations low dose prednisolone therapy. All patients developed their underlying condition prior to LVV onset, occurring at a median 79 [12 – 227] months in SpAD patients and 42 [8 – 284] months in patients with AI.

Other traditional cardiovascular risk factors have long been associated with large vessel vasculitides, with some authors even postulating that GCA may in fact be a phenotype of cardiovascular disease [14Gonzalez-Gay MA, Piñeiro A, Gomez-Gigirey A, et al. Influence of traditional risk factors of atherosclerosis in the development of severe ischemic complications in giant cell arteritis. Medicine (Baltimore) 2004; 83(6): 342-7.
[http://dx.doi.org/10.1097/01.md.0000145369.25558.b5] [PMID: 15525846] ]. Examining the prevalence of traditional cardiovascular risk factors in over 200 patients presenting with GCA, these authors identified a contributory effect of GCA to risk of a subsequent ischaemic event (OR 1.8; p=0.004). Of note however, the patients included were older (median 75 years) and no information on imaging or histology beyond the temporal artery was included.

) the other groups exhibited only weak cyclical trends, again-supporting the concept that LVV in SpAD is phenotypically different and may be triggered by different pathogens or other environmental factors.

Correspondingly, fewer SpAD patients demonstrated diffuse vessel involvement, although it should be noted that single-site disease was observed in only one patient. Considering these findings further, it would be reasonable to question if disease duration is confounding the results. However LVV onset in both AI and SpAD varied widely at median 21 [6 – 176] and 76 [16 – 201] months respectively (p=0.62). Considering both groups, duration of disease did not correlate with single-site (p=0.23) or diffuse LVV (p=0.54). Likewise, immunosuppression at or prior to LVV diagnosis did not influence single-site (p=0.77) or diffuse disease (p=0.63).

Given its retrospective nature, a number of important limitations are inherent to the current analysis. The cohort’s small size cannot be ignored, especially given the long period over which patients were included. Given single centre recruitment, there is potential for inclusion bias. Treatment tapering was performed at discretion of the treating physician, introducing some variability in management particularly among patients without an additional inflammatory disease who were less likely to engage in long-term follow-up.

Collectively, these findings demonstrate an association between SpAD and LVV. Whilst clinically identical to that seen in other patient groups, it appears to occur at an earlier age, demonstrate seasonal variation and predominantly involve central vessels. Based on these findings, consideration of a coexisting SpAD should be encouraged in patients fitting this profile with no known past medical history. The aim of this study was to demonstrate an association between these two conditions. Our results reveal two distinct subsets of GCA, characterized by the absence or presence of SpAD. Recognition of this distinction may be important in interpreting treatment outcomes particularly where treatment responses are inconsistent, such as those seen with tocilizumab in SpA and LVV [26Sieper J, Porter-Brown B, Thompson L, Harari O, Dougados M. Assessment of short-term symptomatic efficacy of tocilizumab in ankylosing spondylitis: results of randomised, placebo-controlled trials. Ann Rheum Dis 2014; 73(1): 95-100.
[http://dx.doi.org/10.1136/annrheumdis-2013-203559] [PMID: 23765873] , 27Villiger PM, Adler S, Kuchen S, et al. Tocilizumab for induction and maintenance of remission in giant cell arteritis: a phase 2, randomised, double-blind, placebo-controlled trial. Lancet 2016; 387(10031): 1921-7.
[http://dx.doi.org/10.1016/S0140-6736(16)00560-2] [PMID: 26952547] ]. Genome-wide association studies are currently evaluating susceptibility genes of GCA [28Carmona FD, Mackie SL, Martín JE, et al. A large-scale genetic analysis reveals a strong contribution of the HLA class II region to giant cell arteritis susceptibility. Am J Hum Genet 2015; 96(4): 565-80.
[http://dx.doi.org/10.1016/j.ajhg.2015.02.009] [PMID: 25817017] ] and sub-analysis of these studies will ultimately reveal, whether or not the two subsets are clearly different.