We report a case of immunoglobulin(Ig)G4-related disease with the radiologic and histopathological manifestations resembling usual interstitial pneumonia (UIP). The patient was a 62-year-old man who presented with progressive dyspnea of insidious onset. High resolution computed tomography of the chest showed lower-lobe predominant peripheral reticulation and traction bronchiectasis but no honeycomb change. Microscopic examination of the surgical lung biopsy showed characteristic features of UIP including architectural distortion by fibrosis with peripheral and paraseptal accentuation, scattered fibroblast foci and microscopic honeycomb change. In addition there were prominent multifocal lymphoplasmacytic infiltrates with a marked increase of IgG4-positive plasma cells (79 per high power field in hot spots) and high IgG4/IgG ratio (up to 67%). The serum IgG4 level was elevated at 760 mg/dl (reference range 9-89), with normal levels for the other IgG subclasses and negative serologic markers for autoimmune diseases. The patient’s symptoms improved significantly with oral corticosteroid treatment.

Report of a case

A 62-year-old man with a past medical history notable only for coronary artery bypass grafting nine years prior presented with insidious onset of dry cough and dyspnea for approximately six months. He denied sputum production, hemoptysis and pleuritic chest pain. He had no SICCA symptoms, arthralgias, myalgias, muscle weakness, Raynaud phenomenon, or mechanic's hands. He reported a 10 year history of pigment loss over his face, bilateral hands and inguinal regions but denied any other skin changes or rashes. There was no suggestion of sleep apnea or aspiration. He was a never-smoker and worked in an office setting without any apparent environmental, occupational or pneumotoxic medication exposures.


Physical examination was notable for bi-basilar mid-inspiratory crackles and hypopigmentation in a distribution consistent with vitiligo, raising the question of localized scleroderma, but his history and physical exam were not otherwise suggestive of underlying autoimmune diseases. 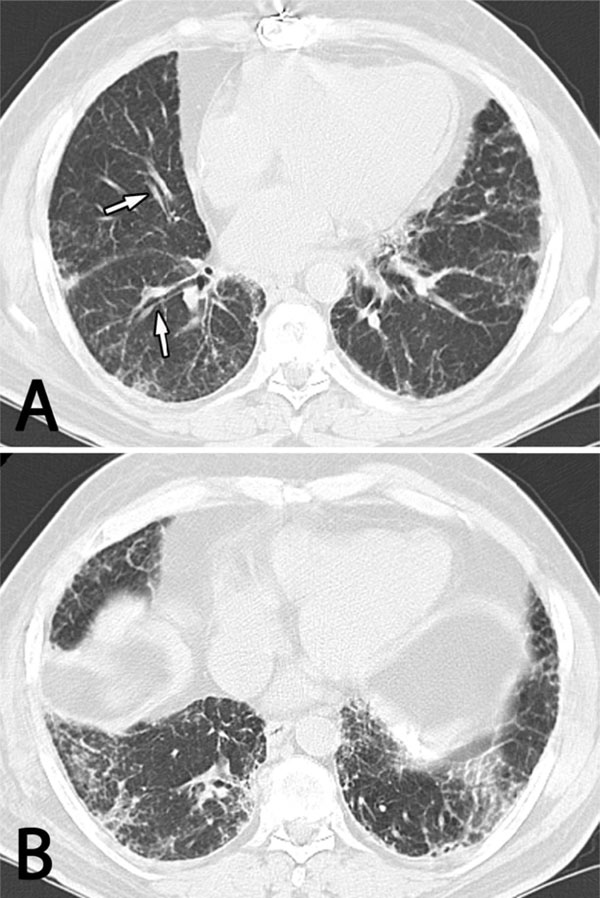 ). There was mild traction bronchiectasis at the bases and mid-zones but no honeycomb change. The mid-esophagus was mildly dilated. A calcified pleural plaque was present on the diaphragmatic surface, presumably related to a hemothorax that had complicated his prior cardiac surgery.

The patient’s case was discussed at our multidisciplinary autoimmune lung disease conference, and the consensus opinion was to proceed with surgical lung biopsy. Microscopic examination of wedge biopsies obtained from all three right lung lobes showed a chronic fibrosing lung disease with peripheral and subpleural accentuation, fibroblastic foci and microscopic honeycombing with inspissated mucus (Fig. 2 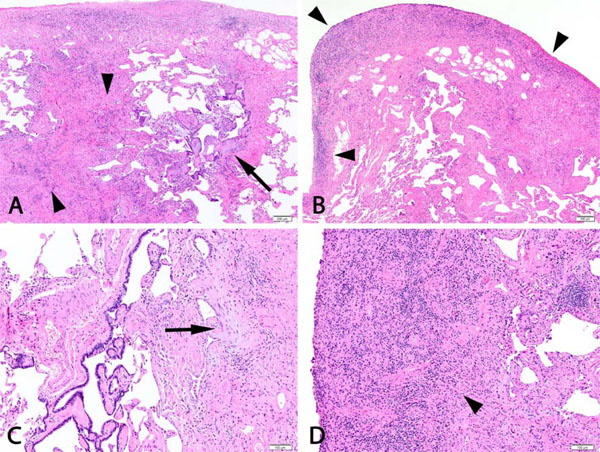 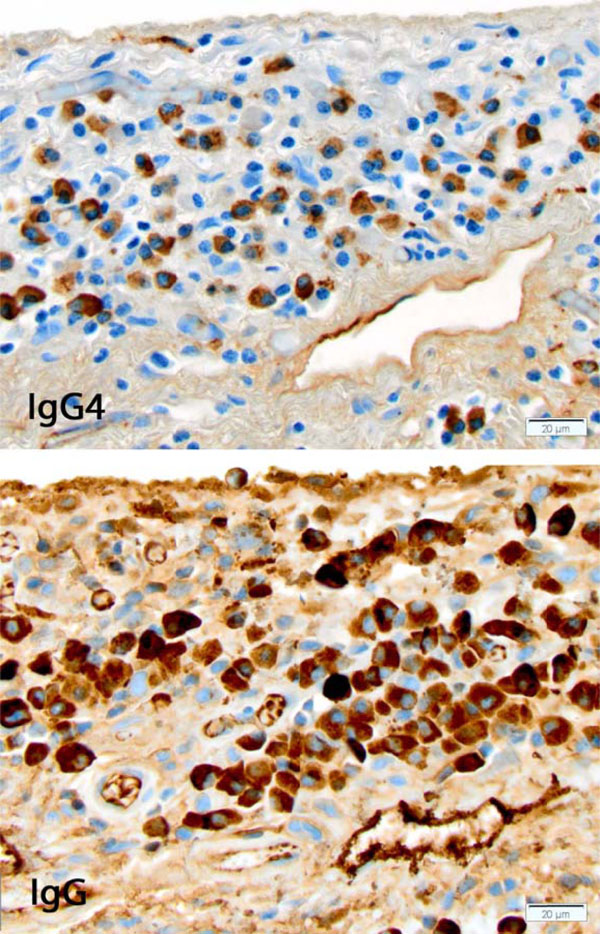 ), with an IgG4/IgG ratio of 67%. No obliterative phlebitis or arteritis was found. Plasma cells were polytypic by immunohistochemical stains for immunoglobulin kappa and lambda light chains.

In light of high IgG4-positive cell counts, a serum IgG4 level was found to be markedly elevated at 760 mg/dl (reference range 9-89). Other IgG subclass levels were normal. The diagnosis of IgG4-RD was reached by multidisciplinary consensus, and the patient was treated with 20 mg of prednisone twice a day. There was no overt involvement of other organ systems by IgG4-RD, but we did not screen exhaustively for subclinical or asymptomatic organ involvement.

Within two weeks of starting systemic corticosteroids the patient reported a significant subjective improvement in his dyspnea and fatigue with only mild residual cough. Unfortunately, three months after his initial presentation the patient died of acute respiratory failure, presumably due to a lower respiratory tract infection based on elevated white blood cell count and radiographic consolidation with air bronchograms. An acute exacerbation of the underlying lung disease could not be excluded since bronchoalveolar lavage studies failed to identify an infectious agent. A post-mortem examination was not performed.

Two coexisting processes remain difficult to exclude, particularly because the terminal event might be interpreted as an acute exacerbation of his ILD. Acute exacerbations are well recognized in the setting of IPF, but have also been described among other fibrosing interstitial pneumonias. Although this patient responded well to systemic corticosteroid therapy, the long term prognosis of UIP in the setting of IgG4-RD is largely unknown, especially when compared with idiopathic or connective tissue disease-associated UIP.


Extrathoracic lesions seem to be common in patients with lung involvement by IgG4-RD and may help suggest or ascertain the diagnosis. Matsui et al. noted them in all of their 18 patients and Zen et al. in 9 of their 21 patients (43%) [7Zen Y, Inoue D, Kitao A, et al. IgG4-related lung and pleural disease: a clinicopathologic study of 21 cases. Am J Surg Pathol 2009; 33(12): 1886-93.
[http://dx.doi.org/10.1097/PAS.0b013e3181bd535b] [PMID: 19898222] , 8Matsui S, Hebisawa A, Sakai F, et al. Immunoglobulin G4-related lung disease: clinicoradiological and pathological features. Respirology 2013; 18(3): 480-7.
[http://dx.doi.org/10.1111/resp.12016] [PMID: 23145930] ]. Interestingly, our patient had experienced mild pigment loss for about 10 years involving hands, face and inguinal regions. Although not a known association with IgG4-RD, a recently reported cohort of 60 patients included one patient with vitiligo [15Hermet M, Andre M, Kemeny JL, et al. Is IgG4-Related Disease a Cause of Xerostomia? A Cohort Study of 60 Patients. Int J Rheumatol 2012; 2012: 303506.]. Since autoantibodies of IgG4 subclass have been described in Wegener granulomatosis (granulomatosis with polyangiitis, or GPA) and various other autoimmune diseases, one could hypothesize that among the IgG4 antibodies produced in our patient was an anti-melanocyte antibody that resulted in vitiligo [16Brouwer E, Tervaert JW, Horst G, et al. Predominance of IgG1 and IgG4 subclasses of anti-neutrophil cytoplasmic autoantibodies (ANCA) in patients with Wegener’s granulomatosis and clinically related disorders. Clin Exp Immunol 1991; 83(3): 379-86.
[http://dx.doi.org/10.1111/j.1365-2249.1991.tb05647.x] [PMID: 1848489] ]. One of the authors has encountered a patient with IgG4-RD who developed an ANCA that resolved with rituximab-induced remission of the IgG4-RD (MCL, unpublished observation).

In summary, UIP with heavy lymphoplasmacytic infiltrates can be a manifestation of IgG4-RD. The study of additional cases of UIP in the setting of IgG4-RD would improve our understanding of the natural history and therapeutic approach to this subtype.

The authors declare that they have no conflict of interest.

This study was funded with departmental funds of the University of Pittsburgh Medical Center Department of Pathology. There were no sponsors associated with this report: the design; data collection, analysis, and interpretation; preparation, review of the manuscript and decision to submit the manuscript for publication were all completed by the authors.