To discover the possibility of using microRNA155 (miRNA155) expression level as a biomarker of Behçet's Disease (BD) activity or remission.

miRNA155 expression significantly decreases with the increase of BD activity scored by BDCAF.

Increased miRNA155 may be used as a biomarker of BD remission and thus in the disease follow up. There could be a prospect of treating the disease via microRNA 155 effect enhancement.

MiRNAs are endogenous small naturally occurring double stranded (about 21-25 nucleotides) RNAs and were first described by Lee and colleagues in 1993 and were termed microRNAs in 2001. They play important regulatory roles in animals and plants through targeting mRNAs for suppression of translation or cleavage. Researchers have begun to understand that miRNAs influence the output of many protein-coding genes and are considered one of the gene regulatory molecules [8Lee RC, Feinbaum RL, Ambros V. The C. elegans heterochronic gene lin-4 encodes small RNAs with antisense complementarity to lin-14. Cell 1993; 75(5): 843-54.
[http://dx.doi.org/10.1016/0092-8674(93)90529-Y] [PMID: 8252621] ].

MicroRNAs exhibit a variable regulatory function in cell growth and differentiation, and are also associated with different human diseases. Previous research on miRNAs has revealed a new paradigm of gene regulations and pathways involved in the pathogenesis of autoimmune disorders, malignant and heart diseases [9O’Connell RM, Rao DS, Chaudhuri AA, Baltimore D. Physiological and pathological roles for microRNAs in the immune system. Nat Rev Immunol 2010; 10(2): 111-22.
[http://dx.doi.org/10.1038/nri2708] [PMID: 20098459] ]. Thus human miRNAs are likely to be highly useful with a great promise as biomarkers in diseases’ diagnoses, and are targets for disease intervention and attractive for applying new therapies.

To show the correlation of miRNA155 expression with BD activity scored using BDCAF and the possibility of its usage as a disease activity or remission marker.

Seventeen patients had ocular involvement and 16 with non-ocular involvement were recruited from Alexandria university hospital, and out-patient clinics in a cross sectional pattern. Patients with a history of another auto-inflammatory or autoimmune disease, other form of vasculitis, hypercoagulable state, malignancy, chemotherapy, radiotherapy or long standing diabetes were excluded. An informed consent was taken from each patient. Three of the non-ocular diseased patients’ samples were excluded afterwards for technical errors.

Fifteen healthy subjects matched to the patients by age and sex served as the control for miRNA155 expression. Age of the patients ranged between 20 to 55 years old with a mean ± SD of 38.03± 9.94 years, and median of 36.5 years. No significant difference between the patients and control subjects. This was applied also for the sex.

Disease activity has been measured using “BDCAF” score depending on the presence or absence of mouth ulcers, genital ulcers erythema nodosum, pustules, arthralgia, arthritis, diarrhea, nausea/ vomiting, headaches, eye inflammation, new central nervous system involvement and new major vessel inflammation, (over the last four weeks before the visit) and accordingly the patients were divided into two groups; a higher disease activity group with a score equals to or more than 4 out of 12, and a lower disease activity group with a score less than 4. Patients included: are shown in Table 1.

Table 1
Clinical Manifestations in Patients that were Active Through the Four weeks Preceding the Study According to BDCAF. (Each of the Mentioned Items Counts for 1 Point as a Score of Disease Activity). 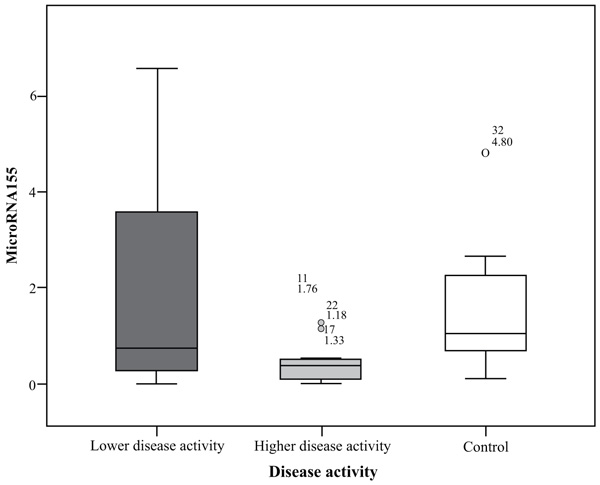 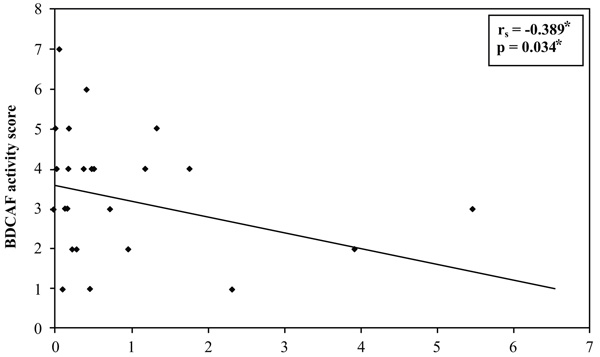 BD is considered a serious syndrome that can lead to severe morbidity and sometimes mortality and unfortunately with no dependent biomarkers to assess activity or remission.

The study was made to show the relation between miRNA155 expression and disease activity.

The results showed a significant inversely proportional relation between miRNA155 expression in the WBCs and disease activity and so the increase of miRNA155 level denotes a disease remission.

Although our study included a more wide disease clinical spectrum, this finding of decreased miRNA155 with increased disease activity was shown before in ocular BD through Zhou et al., 2012 [24Zhou Q, Xiao X, Wang C, et al. Decreased microRNA-155 expression in ocular Behcet’s disease but not in Vogt Koyanagi Harada syndrome. Invest Ophthalmol Vis Sci 2012; 53(9): 5665-74.
[http://dx.doi.org/10.1167/iovs.12-9832] [PMID: 22815348] ] which stated that miRNA155 expression levels in PBMCs and DCs was decreased in BD patients suffering from active uveitis and overexpression of miRNA155 in DCs increased the inhibitory interleukin 10 (Il 10) and decreased Il6 and Interleukin 1B (Il1B) expression which are pro-inflammatory cytokines which may contribute to disease flare. it was shown in some studies, such as Lopalco et al., 2015, that there is an important role Il6 in BD pathogenesis [2Lopalco G, Lucherini OM, Vitale A, Talarico R, Lopalco A, Galeazzi M, et al. Putative role of serum amyloid-A and proinflammatory cytokines as biomarkers for behcet’s disease.2015.].

Some other studies showed an opposite result to ours and that miRNA155 expression is increased in BD activity, as the study of Tili et al., 2007 which found that miR-155 is a potent pro-inflammatory microRNA and stated that Eμ-transgenic miR-155 mice have excessive uncontrolled inflammatory responses, giving excessive Tumor Necrosis Factor Alpha (TNFα) and septic shock hypersensitivity [25Tili E, Michaille JJ, Cimino A, et al. Modulation of miR-155 and miR-125b levels following lipopolysaccharide/TNF-α stimulation and their possible roles in regulating the response to endotoxin shock. J Immunol 2007; 179(8): 5082-9.
[http://dx.doi.org/10.4049/jimmunol.179.8.5082] [PMID: 17911593] ].

The findings in some studies are consistent with ours and some are not, this is may be owing to different ethnicities, different disease activity in the patients in one study from another, also some researches which had the same results of ours or the opposite were depending only on animal studies and we should take this into consideration. Also, BDCAF scoring is almost subjective, depending on patients’ own words in many instances and this may be not so much accurate.

And thus miRNA155 role in BD pathogenesis is still controversial.

Studies on miRNA155 expression levels in active BD disease should be done on a large base to know if there is a cut off to say the disease is active or in remission and for confirmation of the possibility of its usage as a biomarker for follow up of the patient, and to do studies for Ets-1 enhancement or other means of miRNA155 promotion to see the effect on disease progression and potential of this for disease treatment.

Written informed consent was taken from all the patients when they were enrolled.

It is an onus to thank, All the patients and healthy volunteers who participated in this work, Dr. Eman Tayae, the lecturer of Clinical pathology at Alexandria University for her experience and cooperation in lab work, Dr. Rowayda M. Amin, the assistant lecturer of Opthalmology department at Alexandria University for her help in recruitment of many patients from the ophthalmology out-patient clinic and for her solicitude and care. Dr. Alya Elkayal and Dr. Asmaa Nasr, the clinical pathology residents for helping in doing many steps in the procedure, and the lab technicians for being keen and meticulous in their work.