Statins (3-Hydroxy-3-methylglutaryl-CoA reductase inhibitors) exert favorable effects on lipoprotein metabolism, but appeared to possess anti-inflammatory properties among others, as suggested by their ability to inhibit collagen-induced arthritis in mice. Their activity in fibroblast-like synovial cells (FLS) has not yet been studied.

To evaluate the effect of varying doses of simvastatin on apoptosis of FLS.

Synovial tissue, obtained during total knee replacement due to osteoarthritis, was cut into small pieces and cultured in Petri dishes with test materials, as previously described. FLS were incubated for 48 hours with 1 μmol/ml, 5 μmol/ ml, 15 μmol/ml and 50 μmol/ml of simvastatin. Following incubation, apoptosis was analyzed by two-dimensional flow cytometry (FACS) using annexin V/PI staining according to the manufacturer’s instructions.

Different concentrations of simvastatin induced apoptosis of FLS. The level proportion of apoptotic cells of resting or activated with lipopolysaccharide (LPS; 3 μg/ml) FLS, not treated with simvastatin, was 21%. At 48 hours, the rate of apoptosis of activated fibroblasts, incubated with 1 μmol/ml, 5 μmol/ml, 15 and 50 μmol/ml was 22%, 32%, 48% and 41% respectively. Synovial cell viability evaluated by tetrazolium salt XXT was unaffected by the simvastatin concentration used.

Statins are potent inhibitors of 3-hydroxy-3methylglutaryl coenzyme A (HMG-CoA) reductase, the rate-limiting enzyme of the cholesterol synthetic pathway, and they are widely used to treat hyperlipidemia. The beneficial effects of statins have been attributed primarily to their ability to inhibit cholesterol synthesis. They block the conversion of HMG-CoA to mevalonate at the start of the cholesterol biosynthetic pathway with a subsequent increase in LDL-receptor expression on the hepatocyte, resulting in a further reduction of plasma LDL-cholesterol level [1Aguilar-Salinas SA, Barrett H, Schonfeld G. Metabolic modes of action of statins in the hyperlipoproteinemias Atherosclerosis 1998; 141: 203-7.].

Although statins are considered to be the most effective drugs for treating hypercholesterolemia [2Downs JR, Clearfield M, Weis S, et al. Primary prevention of acute coronary events with lovastatin in men and women with average cholesterol levels: results of AFCAPS/TexCAPS JAMA 1998; 279: 1615-22.], the reduction in cardiovascular events observed in patients treated with statins is not fully explained by the reduction in LDL-cholesterol: this has been in part attributed to the ability of statins to modulate several mechanisms involved in the inflammatory process [3Case CC, Ballantyne CM. Statins and inflammatory markers Curr Atheroscler Rep 2002; 4: 42-7.]. Better survival of heart transplant patients treated with statins has been attributed to their immunomodulatory effects [4Bilchick KC, Henrikson CA, Skojec D, Kasper EK, Blumenthal RS. Treatment of hyperlipidemia in cardiac transplant recipients Am Heart J 2004; 148: 200-10.] and reports of improvement of Rheumatoid Arthritis (RA) patients [5McCarey DW, McInnes IB, Madhok R, et al. Trial of atorvastatin in rheumatoid arthritis (TARA): double-blind, randomized placebo-controlled trial Lancet 2004; 363: 2015-1.] lend support to the clinical anti-inflammatory role of statins.

Some in vitro experiments and studies in animal models have also found that these agents may down regulate inflammatory responses such as the production of pro-inflammatory cytokines, chemokines and adhesion molecules; these agents may also reduce the expression of inducible major histocompatibility complex (MHC) class II molecules by antigen presenting cells [10Jury EC, Ehrenstein MR. Statins: immunomodulators for autoimmune rheumatic disease? Lupus 2005; 14: 192-6.].

We studied the effects of different doses of simvastatin on apoptosis of fibroblast–like synoviocytes (FLS).

The LPS and simvastatin treatments were carried out with isolated cells in tissue culture cells and were incubated for 48 hours, using different concentrations of simvastatin: 1, 5, 15 and 50 μmol/ml. Stimulation of the cell culture (FLS) with lipopolysaccharide (LPS) was performed as previously described [18Yaron I, Shirazi E, Yudovich R, Caspi D, Levartovsky D, Yaron M. Fluoxetine and amitriptilline inhibit nitric oxide, prostaglandin E2 and hyaluronic acid production in human synovial cells and synovial tissue cultures Arthritis Rheum 1999; 42: 2561-8.]. After collection of the cells, the incubation period of the cells with simvastatin lasted 48 hours.

The clinical research was conducted in accordance with guidelines for human experimentation specified by the Tel Aviv Sourasky Medical Center. The study was approved by the Ethics Committee of the Medical Center.

Cell viability in the presence of statins was determined in human synovial cultures by tetrazolium salt XTT assay at the end of the experiment.

XTT is a tetrazolium derivative that measures cell viability based on the activity of mitochondria enzymes in live cells that reduce XTT and are inactivated shortly after cell death. XTT is readily reduced to a highly water-soluble orange colored. The amount of water-soluble product generated from XTT is proportional to the number of living cells in the sample and can be quantified by measuring absorbance at wavelength of 475 nm.

Statistical analysis was evaluated by analysis of variance and by Student's t test. P values of less than 0.05 were considered statistically significant. Individual experiments were performed in triplicates. Results represent the findings from several separate experiments. 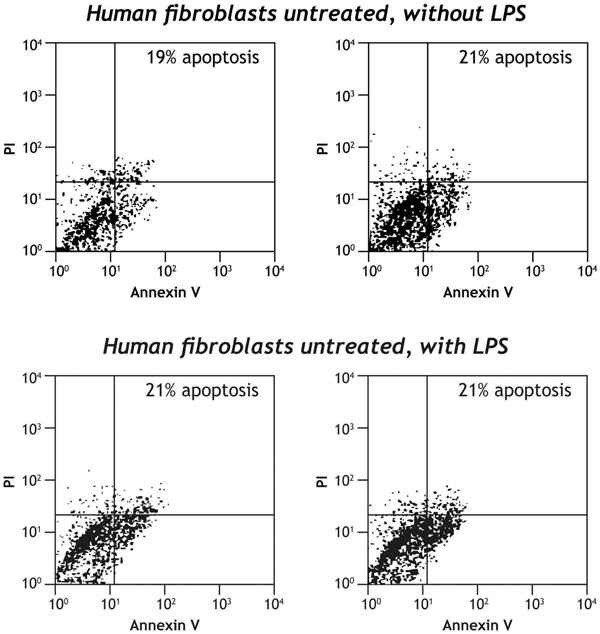 Inflammation of synovial tissue in rheumatoid arthritis is a complex sequence of events involving different cell lines and many soluble factors such as cytokines and chemokines.

In conclusion, our results demonstrate that simvastatin stimulates apoptosis of human synovial cells in vitro. We are aware of the limitations of this study which assessed apoptosis by Annexin PI staining without confirming the results using other methods. Further research is warranted to establish the in vivo relevance of these findings. Recently, increased cardiovascular morbidity and mortality have been observed in several inflammatory rheumatic diseases, including rheumatoid arthritis (RA) [35Del Rinco´n I, Williams K, Stern MP, Freeman GL, Escalante A. High incidence of cardiovascular events in a rheumatoid arthritis cohort not explained by traditional cardiac risk factors Arthritis Rheum 2001; 44: 2737-45.], encouraging aggressive treatment of the inflammatory process, as well as vigorous neutralization of traditional risk factors of atherosclerosis such as hypercholesterolemia. Our study further supports the use of statins in this subset of patients, suggesting an additional anti immunomodulatory effect.