Renal damage is common in scleroderma. It can occur acutely or chronically. Renal reserve might already be impaired before it can be detected by laboratory findings. Microbubble-based contrast-enhanced ultrasound has been demonstrated to improve blood perfusion imaging in organs. Therefore, we conducted a study to assess renal perfusion in scleroderma patients utilizing this novel technique.

There was a linear correlation between the time to maximal enhancement in the parenchyma and the glomerular filtration rate. However, the other parameters did not reveal significant differences between scleroderma patients and healthy controls.

After approval by the local ethics committee, ultrasonographic examinations were conducted in scleroderma patients compared to healthy volunteers as age and sex matched control. Siemens Sequoia (curved array, 4.5 MHz) was used for analysis, and kidneys were documented in B-Mode. The resistance index of the interlobular arteries was measured by color Doppler ultrasound. Measurement of the intrarenal resistance index has been widely established in the evaluation of renovascular changes and is a wide-spread method to get indirect information about the vessel resistance and the perfusion distal of the measuring point. 10 millilitres (ml) of Sonovue ® contrast agent (Altana Pharma) were infused at 90 ml per hour. Sonovue is a suspension of phospholipid stabilized sulphur hexafluoride (SF6) microbubbles. 90% of microbubbles are smaller than 8.0 µm, (mean diameter 2.5 µm) and have a strong echogenicity over the range of frequencies used in medical ultrasound examinations. Ultrasound was performed with the Sequoia CPS programme with a mechanical index of 0.21. After saturation of Sonovue in the kidneys a high mechanical index was used to destroy the contrast medium locally. Replenishment was recorded for 8 seconds. Regions of interests (ROI, Figs. 1 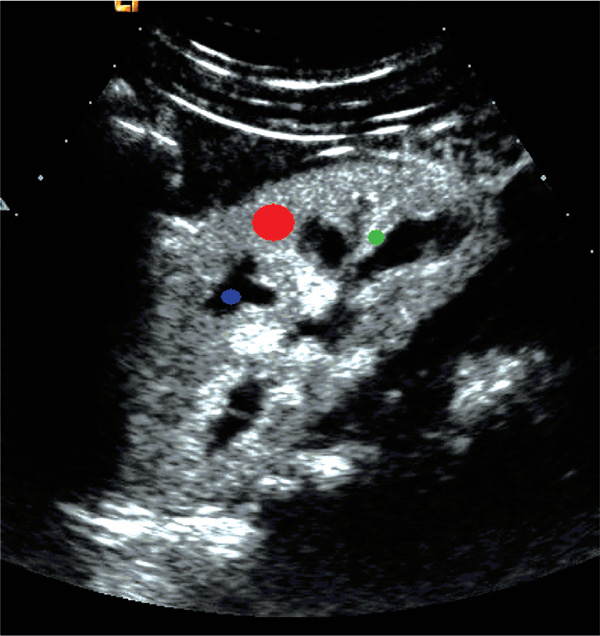 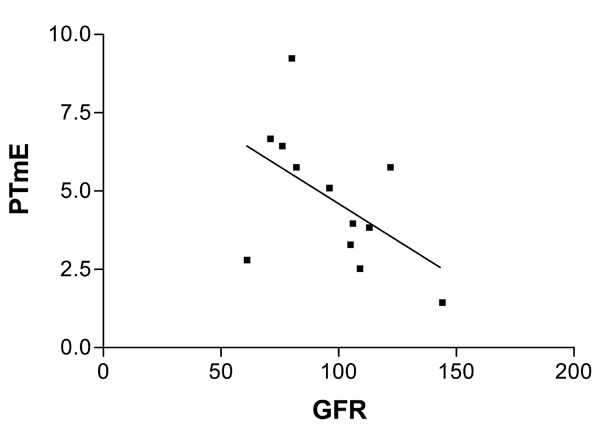 ) were analyzed in renal parenchyma, interlobular artery and renal pyramid with quantitative contrast software (CUSQ 1.4, Siemens Acuson, Mountain View, California) using a typical exponential function as estimation [5 Lucidarme O, Franchi-Abella S, Correas JM, Bridal SL, Kurtisovski E, Berger G. Blood flow quantification with contrast-enhanced US: "entrance in the section" phenomenon--phantom and rabbit study Radiology 2003; 228(2): 473-9.]. Slope, time to maximal Enhancement (TmE), maximal enhancement (mE) and maximal enhancement relative to maximal enhancement of the interlobular artery (mE%A) were calculated for different ROIs. Graphical and statistical analyses were performed by Pearson Correlation (two-sided confidence interval 95%) and Mann-Whitney test to compare between control and Scleroderma group using the software GraphPad Prism 3.02. Graphs are displayed with single patients’ results and median, minimum, maximum, and 25th and 75th percentile on the right side. Patients were characterized by autoantibody profile and concomitant medication. Modified Rodnan skin score was assessed. This score increases from 0 to 51 in severity and there is an association between severe skin involvement and burden of organ-based complications.

Median (mean) age of healthy controls (n=12) was 49.5 (50.6) years, Scleroderma patients (n=14) had a median age of 43.5 (42.4) years (p=0,1498; n.s.). Nine patients suffered from the diffuse form of systemic sclerosis, whereas 5 patients presented with a limited form. Six patients were tested positive for antibodies against Scl70 (70 kD extractable immunoreactive fragment of anti-topoisomerase I), 2 patients against centromere protein B (CENP-B), and 1 against ribonucleic acid (RNA) polymerase. Mean (median) disease duration was 6.1 (5.5) years. Eight patients had at least one digital ulcus at the time of examination. Seven patients had pulmonary manifestations, all patients had esophageal involvement. Three patients revealed a reduction in glomerular filtration rate below 80 ml/min. Five patients were treated with an angiotensin-converting-enzyme (ACE) inhibitor. In the group of healthy controls, no renal dysfunction became evident by labaratory testing and treatment with an ACE inhibitor was not reported. Inspite of this, there was no significant difference in glomerular filtration rate between both groups (estimated by using Modification of Diet in Renal Disease (MDRD) formula [6 Levey AS, Bosch JP, Lewis JB, Greene T, Rogers N, Roth D. A more accurate method to estimate glomerular filtration rate from serum creatinine: a new prediction equation. Modification of Diet in Renal Disease Study Group Ann Intern Med 1999; 130(6): 461-70.], validated only below 90ml/min, p=0,52).

Six patients were treated with corticosteroids of more than 5 mg of prednisone equivalent per day at the time of examination. All except one in the patient group were female. The mean (median, SD) modified rodnan skin score was determined at 10.8 (7.5, 9.0).

Resistance index was analyzed in the interlobular arteries. There were no significant differences between both groups (data not shown).

Renal perfusion using Sonovue was recorded and afterwards quantified as described above.

Renal perfusion assessed by microbubble-based contrast-enhanced ultrasound revealed a linear correlation between time to maximal enhancement in renal parenchyma (PTmE) and glomerular filtration rate (GFR) assessed by MDRD that was close to statistical significance. The correlation coefficient using Pearson’s linear correlation was determined at -0.52 (CI 0.95%, -0.8419 to 0.07911) with p=0.08 (Fig. 4 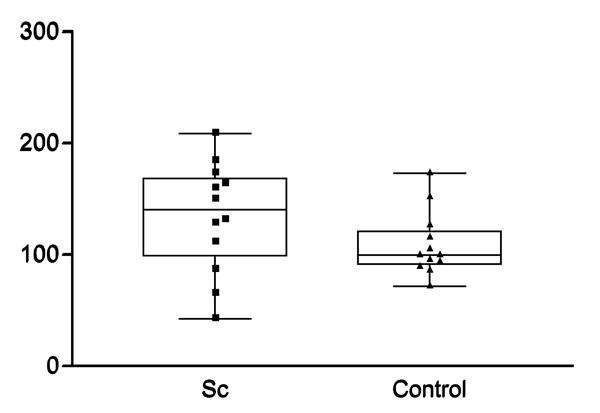 ), and slope in renal parenchyma (first ascending part of the curve resembling the speed of blood moving into the selected region (Fig. 5 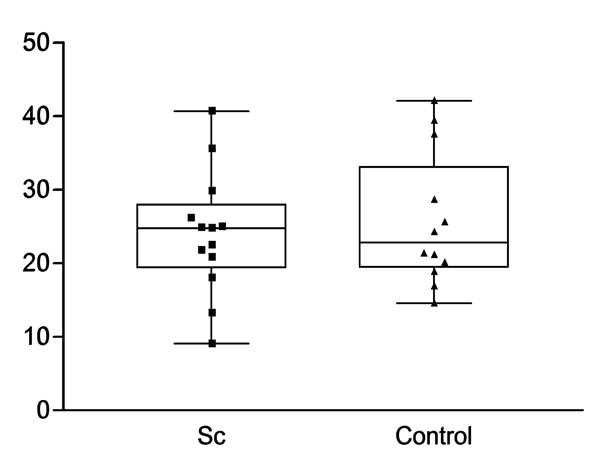 Estimation of renal perfusion by microbubble-based contrast media was established in a phantom [5 Lucidarme O, Franchi-Abella S, Correas JM, Bridal SL, Kurtisovski E, Berger G. Blood flow quantification with contrast-enhanced US: "entrance in the section" phenomenon--phantom and rabbit study Radiology 2003; 228(2): 473-9.]. Contrast-enhancend ultrasound has been demonstrated to detect perfusion differences in transplanted kidneys that were about to be rejected compared to non-rejected kidneys [7 Fischer T, Muhler M, Kroncke TJ, et al. Early postoperative ultrasound of kidney transplants: evaluation of contrast medium dynamics using time-intensity curves Rofo 2004; 176(4): 472-7.], and to determine other causes of delayed graft function [8 Grzelak P, Szymczyk K, Strzelczyk J, et al. Perfusion of kidney graft pyramids and cortex in contrast-enhanced ultrasonography in the determination of the cause of delayed graft function Ann Transplant 2011; 23(16): 48-53.]. Applying this novel technique to scleroderma patients to assess renal function, we were able to reveal a correlation between GFR and the time until maximal enhancement of microbubbles in the renal parenchyma (PTmE). However, some limitations need to be considered when evaluating this finding. The correlation was only close to statistical significance and a larger cohort of scleroderma patients is required to further analyze the correlation and find out whether this novel method might provide substantial information beyond the glomerular filtration rate. There was no dose finding study ahead and the level of microbubble saturation might have influence on test results. There is a limitation of this calculation as the GFR estimated by MDRD was mainly established in a patient cohort presenting with a GFR below 90 ml/min. In a very small previously published scleroderma group, there were significant differences observed in maximal enhancement in parenchyma relative to maximal enhancement in interlobular arteries (Pmax%A) compared to normal controls [9 Kleinert S, Baumgaertner C, Feuchtenberger M, et al. Changes in renal perfusion in patients with systemic sclerosis Arthritis Rheum 2005; 52(9): S591.]. This parameter suggests a higher independence of renal perfusion since this parameter is calculated as an intra-individual relation of perfusion that might be independent from the filling of the extrarenal vessels. However, in our study, we were not able to confirm these differences in Pmax%A (Fig. 4

M. Jenett received lecture fees from Siemens and Altana Pharma and an unrestricted research grant by Bracco Altana Pharma. All other authors: None.

We are grateful for financial support of the study by “Deutsche Stiftung Sklerodermie” (German Scleroderma Foundation).

This publication was funded by the German Research Foundation (DFG) and the University of Wuerzburg in the funding program Open Access Publishing. An unrestricted research grant by Bracco Altana Pharma that was used to cover fees for patient insurance.