Raf kinase inhibitor protein (RKIP) had been identified as one of prognostic indictor in various malignant diseases. Association of RKIP expression and the clinical-pathological features were not investigated in patients with resectable non-small cell lung cancer (NSCLC).

159 sectioned samples from surgical NSCLC patients were investigated by immunohistochemistry in order to reveal the associations between RKIP expression and clinical-pathologic features.

Down expression level of RKIP was found relating to lymph node metastasis in resectable NSCLC patients in this study.

Lung cancer is the most common cancer and the leading cause of cancer-related death worldwide. Not too many non-small cell lung cancer (NSCLC) patients are suitable for surgery when diagnosis was confirmed, and prognosis of these patients always varied after surgery. So it is important to find prognostic marker and initiate adjuvant therapy after surgery in these patients. Recent findings demonstrated that phospho-RKIP was a predictive indicator of lung cancer survival [12Huerta-Yepez S, Yoon NK, Hernandez-Cueto A, et al. Expression of phosphorylated raf kinase inhibitor protein (pRKIP) is a predictor of lung cancer survival BMC Cancer 2011; 11: 259.]. However, there is no research on the relationship of RKIP expression and clinical-pathologic features of surgical lung cancer patients.

The aim of this study was to determine the correlation between RKIP expression and clinical-pathologic features in resectable NSCLC. 159 tissue samples from resectable NSCLC were investigated using immunohistochemistry.

From January 2004 to May 2006, 159 patients with resectable NSCLC underwent curative surgical resection at Department of cardiothoracic surgery, Xiangya medical school Xiangya Hospital. None of the patients had received preoperative chemotherapy or radiotherapy. Extensive mediastinal lymph node dissection was performed during the surgery. Resected specimens were sent to pathology department for histopathological and immunohistochemical examination. The study was approved by the Medical Ethics and Human Clinical Trial Committee at Xiangya Hospital, and patients gave the oral or written informed consent.

Details of patient’s clinical characteristics including age, gender, tumor size and histological type were recorded. The stage of the primary tumor was determined by reviewing both the surgical and the pathological reports according to the international staging of lung cancer [13The World Health Organization histological typing of lung tumours Am J Clin Pathol Second. 1982; 77: 123-36.]. Clinical-pathological variables of the subjects are summarized in Table 1.

Immunohistochemical staining for RKIP was carried out using the SuperPicTure™ Polymer Detection kit (Zymed, San Francisco, CA) according to the manufacturer’s instructions. The slides with 4-μm sections of paraffin tissue blocks were dried at 60°C for 30 minutes, treated with xylenes, then dehydrated in alcohol. Endogenous peroxidase was blocked with 3% H2O2. Microwave treatment of the slides was performed for 15 min in 0.01 mol/L citrate buffer (pH 6.0). After incubating the RKIP antibody with the tissue at 1:100 dilutions, the HRP polymer was added, and after a wash step, the DAB chromogen is then added to visualize the antibody binding. Slides were counterstained with hematoxylin.

Immunohistochemical Analysis of RKIP in NSCLC

The immunoreactivity against RKIP was mainly in the cytoplasm (Fig. 1 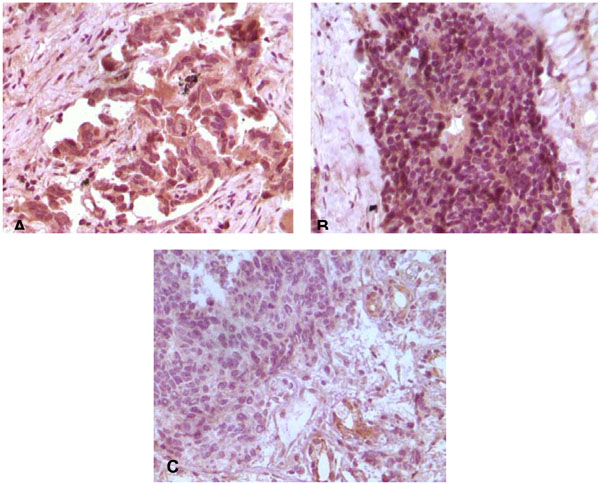 In summary, given the high mortality of lung cancer, the relationship between RKIP expression and lymph node metastasis provided new clues to understand the cause of metastasis.