The frequency of metabolic alkalosis among adults with stable severe CF-lung disease is unknown.

Metabolic alkalosis is more frequent in stable patients with CF lung disease than in COPD patients. This might be due to defective CFTR function with abnormal electrolyte transport within the kidney and/ or gastrointestinal tract.

Participants in both groups had arterial blood gas (ABG) and serum samples collected for electrolytes and albumin. For the evaluation of the acid-base disturbances, ABG results were encountered. Medications and comorbidities were recorded from the chart review. We also collected data of serum hemoglobin (Hb) and hematocrit (Hct) from complete blood counts to assess for evidence of hypovolemia, where available. Pulmonary function testing was carried out as part of the patients’ usual care at the time of clinical stability.

All participants had already consented to be included in the Database. Inclusion criteria to both groups were age ≥ 18 years, clinical stability and/or initiation of long-term home oxygen therapy, and forced expiratory volume in 1 second (FEV1) ≤ 40% of predicted. Participants were included in the study only if they had FEV1 measurement and blood tests collected within 2 months of the ABG.

Exclusion criteria were pregnancy and patients who have undergone lung transplantation. We did not exclude patients with liver disease, CF-related diabetes (CFRD), or patients with sputum culture positive for Burkholderia cepacia complex.

To identify participants with metabolic alkalosis, we used the Stinebaugh-Austin diagram [4 Stinebaugh B, Austin W. Acid-base balance Common sense approach Arch Intern Med 1967; 119: 82-.]. The acid-base data was plotted on this diagram to ensure that the metabolic alkalosis is a primary disorder, beyond any renal response to a possible respiratory acidosis. During this analysis, we used the venous HCO3 instead of the arterial HCO3 level. The final results were extracted from this diagram as the study primary outcome.

The statistical examination of differences between groups was done using unpaired t-test for parametric data and the X2 test for nonparametric data, using a Type I error rate of 0.05 and power of 0.90. Means, standard deviations (SD), and further statistical analyses were calculated using Statistical Package for the Social Sciences (SPSS) 15.0® program.

We identified 19 eligible CF patients during the study period. After excluding patients with incomplete blood work results, 20 patients were involved in the study, 14 in the CF group and 6 in the COPD group. Table 1describes subjects’ demographics, FEV1, ABG results, and serum electrolytes.

Mean age was statistically significantly lower in the CF group, compared to the COPD group. Mean FEV1 was not significantly different between the two groups. All blood gas results were compensated with a pH within the normal limits. In the CF group, a primary metabolic alkalosis was observed in 8 participants (57%). Mixed respiratory acidosis and metabolic alkalosis was evident in 28% (4/14) of subjects. The remaining 2 participants had primary respiratory acidosis. In the comparison COPD group, only 33% (2/6) had metabolic alkalosis. Both of these subjects also had respiratory alkalosis. The remaining subjects had either normal values or other acid-base disturbance. The acid-base interpretations are plotted on Stinebaugh-Austin diagram (Fig. 1 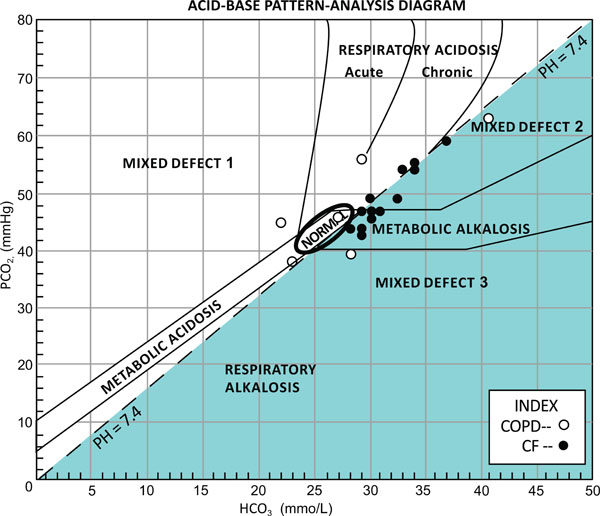 None of the subjects was on diuretics or alkalinizing agents at the time of the testing. One patient in the control group was on steroid therapy. There was no recent history of vomiting or diarrhea in any of the subjects.

In our opinion, there are two other plausible hypotheses for the development of metabolic alkalosis in CF patients with a stable disease:

We identified limitations in our study design. Given the retrospective nature of the study our recruitment was limited by missing data, especially in the control group. However, given the large difference found between the groups, we believe the conclusions remain valid. We were also limited by missing data in assessing fluid status, and therefore our discussion of mechanisms remains speculative.

We conclude from our data that metabolic alkalosis is more frequent in stable patients with severe CF lung disease than in COPD patients with comparable disease severity, which may be due to CFTR inhibition of ENaC in the kidney. Furthermore, this can be also due to the association between CFTR and bicarbonate transport in the kidney. Larger prospective studies are required to confirm these observations and to clarify the underlying mechanism for this acid-base disturbance.

Author FA collected the data and drafted the manuscript. Authors FA, MEF, and DET revised and approved the final manuscript.

We would like to thank Mr. Brent West from the department of respiratory therapy and Mrs. Myra Slutsky for their valuable contribution in allocating participants. Mr. West provided technical support as well. We would also like to thank Dr. Kamel Kamel from the nephrology department for his valuable input and feedback during the preparation of this manuscript.

Authors FA and DET have no conflicts of interest to disclose. Financial Support for MEF: Nelson Arthur Hyland Foundation